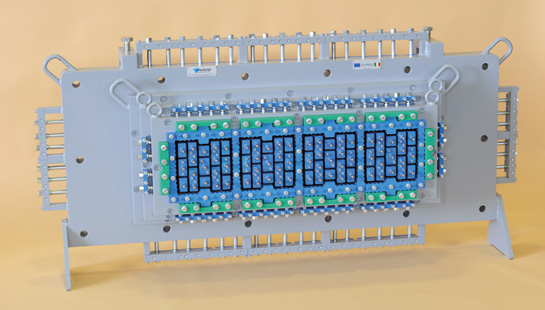 TECNOFILIERE: NEW DIE FOR SOUTH AMERICAN MARKET
Tecnofiliere has designed and built a new die for the production of Double Pared blocks with high thermal transmittance for a major South American brick producer. The model CF2 FC 4-exit die has been meticulously designed by the company’s technical team and is capable of withstanding the high level of wear typical of the extrusion process. For this purpose it has  been equipped with cores and liners made of Tecnocarbide®, a special tungsten carbide with outstanding toughness and hardness characteristics (2000HV), in addition to a high thickness chrome plated core holder and intermediate plates made of wear-resistant material (Hardox). The two external braking systems housed on the two sub-liners also play an important role, allowing the clay flow to be controlled precisely where required according to the extrusion conditions.