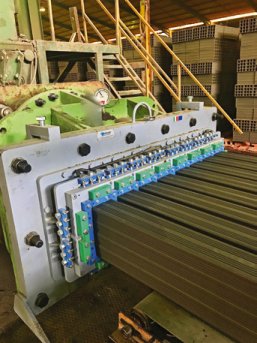 Tecnofiliere
Dernières nouvelles
BRIQUETERIE LAHMAR & CIE INTRODUCES NEW TECHNOLOGIES
Briqueterie Lahmar & Cie (BLC), a company based in Jammel in the Monastir governorate, is one of Tunisia’s leading clay brick manufacturers. It was founded by the Lahmar family in 1991 at a time of rapid expansion of the local construction industry driven by the favourable economic climate. Benefiting from an advantageous geographical position close to excellent quality clay quarries, BLC began its industrial journey focused on quality, research and technological innovation.
In 2016, BLC focused on the extrusion department and replaced the existing dies with new modular systems so as to be able to replace only worn parts when necessary, thereby increasing their lifetime. For this delicate step BLC contacted Tecnofiliere, whose expertise helped to improve both the appearance and form of BLC products. The first order was for two dies for B12 hollow bricks (150×200 mm) with 6 exits (12 holes per exit), which was followed up with an order for several spare parts in 2017. Next BLC adopted two more dies, one for B8 hollow bricks (100×200 mm) with 8 exits and 8 holes per exit, and one for the platrière (hollow partition tile) format (70×200 mm) with 10 exits and 8 holes per exit. In this latter case Tecnofiliere proposed the brand-new TG model featuring a clay conveying cone with internal special steel liners which can be replaced when worn without having to disassemble the cone.
Informativa per il trattamento dei dati personali - Regolamento UE n.2016/679 – GDPR. LeggiAccetto
Privacy & Cookies Policy